Whatever Happened to the Coffee Shop Millionaire Scheme?

Well, Trister and his buddies did what wasn't expected. Sometime after the initial launch, they actually kept improving this scene and added more material. Somewhere along the line, they stopped. You can't sign up for or get to the VIP area from the old site. I expect that they've got a new one now (the older login falls under "http://archive.coffeeshopmillionaire.com")

Where the new site exists (if it does) is a mystery. (Type in "site:onlinemillionaire.com" into Google and you'll find what they have listed for it. Mostly everything goes to an overlong sales video, all tricked out (and missing Trister's bald head and t-shirts). You can see that he seems to have moved on. Almost all his links now just go to his sales video. His "blog" (http://blog.coffeshopmillionaire.com) has 5 posts, the last one in June 2011. And you simply can't get VIP access anymore. The support forum seems to be active, though. People still asking for refunds...

This means that Trister & CO. have moved on, leaving ClickBank to keep bringing in customers for them. Nice work, overall.

I'd research this more, but as I'll explain below, this Coffee Shop Millionaire scene is simply another eductional step toward building a REAL business.It's not a scam, but it's only a stepping point. 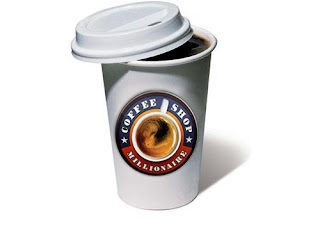 ...is much improved over the last time I visited (sometime last year.) Because you saw that I'd pretty much washed my hands of it.

Funny thing was, I actually did get people to click through and sign up for his stuff. So I made a few recurring commissions - nothing like what he promised, but that's to be expected when a people start throwing numbers around.

The important point in this is to realize that it's a pyramid activity - the people at the very top rake in tons. And they build a huge list which they can in turn sell more to.

And it keeps working as long as these affiliate marketers are excited about it.

The problem is that they only share the list among themselves. Affiliate sales people don't get that list. And it was pointed out to me by a multi-millionaire (Mike Dillard) that unless you are building your list, you aren't building your business.

In other words, if you are simply pimping your time and your blog in order to make sales, then it's only another J.O.B. If you don't keep offering products, then you quit having income. True, if you can get into the upper end of Amazon and keep selling their huge items, then you may have some pretty regular passive income for awhile. But you can count on things changing, and producers moving to new products. So links won't work after awhile. And your blogs don't get the same effect as they did - because those links quit working.

Trister and his buddies simply tell you how to do a roll-out. And how to get a bunch of other people with related products together so you can all share the names which come in. And that is what's invaluable. Well worth the low entry price.

However, you can do much better.

Once you've seen how thin the system is in Coffee Shop Millionaire, then a little research will lead you to a much better one.

Because Trister and his cronies are really starting to verge on network marketing, which is where the real big money is.

I've put together a page which explains this. You'll want to study Dillard and you'll want to get a quick backend to start with so you can start building a real business by getting emails and building your list. It's really using most of the same tools Trister markets with - but it's not some huge hype machine.
It's the beginning of your online millionaire plan.